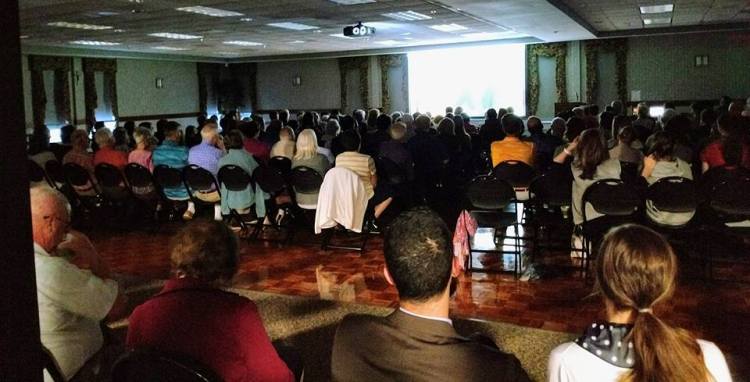 Over 250 people came to see Fatal Flaws at Assumption College in Worcester on May 17th and to hear Bishop McManus lead the panel in discussing the terrible impact assisted suicide would have on the Church and her vulnerable people.  The movie clearly documents that once legal, assisted suicide becomes more common.  Safeguards are removed to make it available not just to the terminally ill, but also to those who are not terminally ill, the mentally ill, children, newborns, even those who are tired of living.  Several cases show how elders and the disabled were being coerced by their doctors to commit suicide.  These are the stories you do not see in the New York Times or the Washington Post.

Bishop Robert J. McManus reiterated the Church’s teaching against assisted suicide and euthanasia, quoting from the 1980 CDF document Declaration on Euthanasia and the 1995 Pope Saint John Paul II encyclical, Evangelium Vitae.  He said those who choose assisted suicide cannot be buried by the Church, yet, in Canada, the bishops of the eastern province of Quebec have decided otherwise.  He hope the laity will take a larger role in keeping assisted suicide illegal and will be discussing the issue in June with the priests of the diocese.

Clark University philosophy professor Patrick Derr summarized the impact of the Massachusetts landmark Supreme Judicial Court decision Superintendent of Belchertown State School v. Saikewicz.  He wrote about this in the Telegram and Gazette Faculty Forum.  This law, which only applies to Massachusetts, grants that any right a competant person has is extended to incompetant persons as determined by their guardian.  In other words, a caregiver can decided to euthanise a person with dementia even if the person never wanted it.  This is why the Death Lobby is so eager to legalize assisted suicide in Massachusetts.

I spoke briefly about the need for a Healthcare Proxy and the pitfalls of Advance Directives and MOLST forms.  I will be making more information available aboout these topics.

Thank you Bishop McManus and Professor Derr for participating and for your tremendous insights!!!  Thank you to all those active in the Pro-Life movement who came to be better educated about this issue.  You are the seeds sowing the growth of Human Dignity.

My parish of Christ the King had by far the best turnout, with over 25 people.  This is because Msgr. Tom Sullivan actively promoted by allowing flyers to be placed around the parish, putting the event in the bulletin, through personal annoucements after Masses, and by attending the event himself.  Ours was a great example of how priest and laiy work together to evangelize.